After much debate for the last several years (and yesterday), the old chest freezer took a ride this morning in the newly reclaimed Xterra.  The local appliance company said if we drop it off they will take care of disposing of it.

We just don’t need it anymore.  With just the 2 of us, even 2 refrigerators seems excessive.  That debate will be ongoing – probably for several more years.

This freezer still works wonderfully.  We inherited it when Barb’s Grandma died in 1993 (24 years now!  Wow!)  Hence part of the reason for the debate.  How do you get rid of “useful” stuff you inherit.  Of all things, it’s a freezer.  We also got the miniature lemon tree she had on her patio forever.  It still produces a ton of lemons every year!  Whenever John makes lemonade using those lemons, we call it Grandma’s lemonade.  He freezes the lemon juice but we really don’t need a separate chest freezer for that.  Grandma lives in our hearts, not the freezer.  (That sounds weird now that I typed it!)

Grandma had this freezer for at least 10 years.  She moved back to California in 1981 and we think that is when she purchased it.  [Interesting side note, she moved to Iowa to care for her ailing father in 1972.  Barb can’t remember if she put it into storage when she left.  It could be even older than we think.]

Among the things in it were soup bones (since 2002- yikes!)  and some meat from a partial cow purchase in 2009.  We think those are no longer edible. 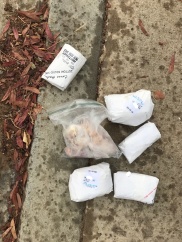