Skip to content
HomeStill Can’t Believe We Did It!

This falls into one of those “I can’t believe we did this!” situations.

And “I still can’t believe we did this!” a second time.

A couple of months ago, a couple friend invited us to the shooting range.  We agreed, figuring what’s the worst that will happen – if we hate it, nothing in our life changes.  If we like it, it is another activity we can do with this couple.  This is the first “I can’t believe we did this” moment.

Even though I grew up with a father who hunted, I was never allowed to go with him or to even think of touching one of his guns.  My father had a very “Guns are for guys” mentality.  (Actually, a lot of things were for guys and not girls.)  I had never touched a gun, John hadn’t touched one since basic training in 1975.   I’m a pretty hard-core gun control person – I don’t have a problem with people waiting to make purchases; guns should be locked up at all times; you name it, it probably applies to me, or really close to my beliefs.  John has always wanted to have one while we travelled but I resisted.

Well, we had a great time shooting the “twister” target.  I was surprised I even hit it!  K brought 5 different guns and his wife, K2, brought her 1.  We spent about 2 hours at the range shooting all of them.  K is extremely knowledgable and has a concealed weapon permit in California so I know he has been checked out and tested.   K2 took the CW course with no intention of carrying, but wanted to know all the laws and procedures just in case something happened while her husband was carrying his.

Here are my first 2 rounds.  Evidently, this makes me a good shot. 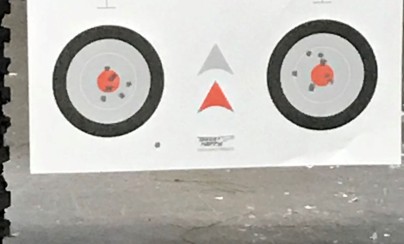 A couple of weeks later, we went with them again.  It was just as enjoyable!  Maybe even more so since I knew I would be able to hit the target.  It was an exciting adventure!

This last weekend, we went with them for a third time.  After breakfast we went with them to the gun shop, figuring we would purchase the ammo they were replacing since they have provided everything thus far for our outings.

Now for another “I can’t believe we did this!” moment.  We purchased a gun.   John is happy we will have one with us while we travel.

We are not the least bit annoyed/disappointed/angry we have to wait 10 days before we can pick it up from the gun shop.

I don’t think there is a single gun law in California I disagree with.  Will being a “gun owner” change any of this?  Probably not!

4 thoughts on “Still Can’t Believe We Did It!”